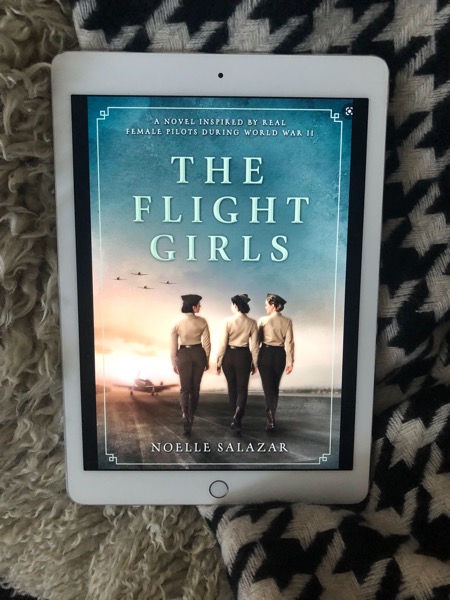 We had the honor of Noelle Salazar joining us live in our Goodreads Reading Group Behind the Pages with The Traveling Friends where we asked her about her book The Flight Girls. She spent an enjoyable hour with us answering our questions and sharing such wonderful insight into The Flight Girls. We fell in love with these strong women all over again. I am excited to share some of the Q & A with you here on our blog.

Brenda I was in the bookstore yesterday and I saw The Flight Girls upfront. I always get a little excited seeing a book I enjoyed upfront and I just want to tell everyone around me they should read it. lol

How does it feel to see your book on the shelves of bookstores?

Noelle I will admit, it is AMAZING to see my book in stores. Five year or so years ago, when I was just starting out trying to find an agent, I told a good writing friend that if I only had one book on one shelf in one store I’d be thrilled. To have people sending me pictures of stacks of my book on store shelves all over the United States is surreal. And soon it will be in the UK as well. It feels wonderful. It’s been a long road. I’m so pleased.

Brenda Tell us a bit about who the women of the Women Airforce Service Pilots were?

Noelle The WASP were a group of brave women who stepped up to serve their country the best way they knew how – by flying. Thanks to them, many male pilots were able to go fight overseas – something the country desperately needed but that the men were unable to do because bodies were needed to test patched-up warplanes that had already seen action, new planes right off the production line, and even target towing for live ammunition gunnery training from the ground. The women trained to do these jobs without military benefit and with all the spunk and American pride you can imagine. Over 1,000 served. 38 perished in service. When their service was over, they were no longer allowed to fly military aircraft and many went back to whatever they’d been doing before the war. Only some found jobs with commercial airlines, but not as pilots.

Brenda What inspired you to write about The Flight Girls?

Noelle I found a small anecdote written by a pilot in her flight logbook. At the time of the entry, she was a civilian pilot training airmen recruits on the island of Oahu. Cornelia Fort was in the air when the Japanese flew in. She was the first American pilot to spot the Japanese fleet. Cornelia Fort, tragically, was the first American female pilot to die in service. She was flying a plane and a male pilot in another plane got too close and clipped her wing. She crashed and died.

That one logbook entry started this entire idea of a story for me. From there, I read more anecdotes – and what stood out was the women’s spirit. Their courage. And their different walks of life. I’d gone to Navy bootcamp at 18 yrs old and had witnessed some of this myself. I have fond memories of that time. In a way, this story also honors the women I spent time with in the heat of an Orlando Navy base. As well as the many other groups of women I’ve had the privilege to become sisters with over the years.

Lindsay It was eye opening to read about the stereotyping and discrimination the girls received in their roles as pilots. They often weren’t taken serious as career women. Did you find it frustrating to write those parts?

Noelle The hardest part of writing those parts was letting them stand. How badly I wanted to correct the situation. To have the women mouth off. To stand their ground. To give a little lip service. But the truth is, in the 40’s that didn’t often happen. Women were just starting to get their feet under them. To have a voice. To speak with that voice. Entering the workforce helped. And for the WASP, working for the military I think helped even more. They were in a man’s world doing a man’s job – and many times doing it better. But they still had to know their “place”. I tried to find a good balance of showing the discrimination and showing the women at times taking it and at times standing up for themselves. I gave Audrey more of a voice in those matters too – because she is the protagonist – but also because she seems to me the type of woman so sure of her skill she doesn’t need to pretend otherwise – and won’t.

Lindsay Did you know the fate of each of the characters before writing the book? Did you have that planned? Or is that something that came about as you were writing?

Noelle Good question. I did not plan any character’s fate but Audrey and James. The rest of the characters showed up on their own, and left on their own. Or stayed. Only one character’s fate changed during the editing process – and I’m so glad. I often think I might one day write her own separate story. I will admit though, it was hard to lose certain characters. I could see their futures – and to have their lives snuffed out broke my heart. But such is the price of war…

Lindsay I adored Audrey’s character! Was her character inspired by anyone you know personally?

Noelle I love Audrey too – thank you. She was larger than life in my mind and she will always hold a most special place in my heart. We worked together, Audrey and I, creating exactly who she was – and who she evolved into, which was a fuller, more realized version of herself.

I get asked a lot if she is me, or if she was inspired by someone but the truth is – Audrey is the woman I aspired to be at 20-something years old. She knows herself. She’s sure of herself. She has a goal. I was none of those things then (and sometimes still). I admire her. Instead of writing someone I know, I wrote the woman I want to be. And in writing her, I became who I want to be.

Lindsay How did you research for this book? Did you meet with any female pilots?

Noelle In the beginning, the research was tough. There wasn’t a lot of information on the world wide web to be found. Even less books. It took 6 years of off and on research to find what I did – and today I still come across new facts that make me wish I could add them in.

Right before my first round of edits I got to speak on the phone to Jane Doyle. She gave me great tidbits of what daily life in training was like – something I couldn’t really get from books or articles. I wanted the mundane details: What did you do when you got up in the morning. What was downtime like, etc. And she told me with great spirit about how she met her husband during the time she was stationed at the same base as him. Jane passed away this past February. In May I attended the Annual WASP Homecoming Reunion. I met two other WASP. And I met Jane’s daughter, who had come in her mother’s memory.

Norma I am a reader that loves covers and titles of books. Can you give us a little bit of insight into the finished cover and title of this book? Did you have your say in both or did they change at all?

Noelle I will admit the title gives me some pause still. For years this novel had one name and one name only. Now, in my heart it has its “real” name and its “stage” name. 😉 I love The Flight Girls and it was painstaking to find something we all agreed on. It was a decision based on marketing – and I will say – the marketing department sure knows their stuff – clearly! But in my heart, she will always be “War Bird”. And thus, my little bird – as I tend to call her. I even got bird tattoos in her honor. When I found out the title was going to have to be changed there was a mourning period. A loss of breath. And a tear or two. But she’s flown well under her new names. She hasn’t faltered one bit.

As for the cover, I never had ideas in my head for what she would look like, which made it all quite exciting. Every version like unwrapping a present. Is this her? This one? Maybe this… I did like their original idea, two women perched on the wing of a plane – so reminiscent of the photos you see of the women from that time. But the final product makes my heart full. There is an iconic photo of three women passing beneath the sign to the airfield where they trained at Avenger Field and, to me, the cover image (which was done using real live models!) is perfection

Brenda What do you want readers to take from the story?

Noelle The bonds of sisterhood. How women are stronger together. I’ve experienced this time and time again personally. And it’s funny because there have been times in my life that I almost feared other women – stereotyping them in my mind so as not having to reveal myself – and then craving their company because who gets me better than another woman? The trials, the discrimination, the loneliness, the masks we sometimes wear… There is no one better to share with than another female. To bare our souls to one another only makes us stronger – not weaker.

Brenda You kept the story events lighter here and focused on the camaraderie of the women and add a bit of romance. Was there a reason you focused more on that?

Noelle There are many heavy historical fiction stories out there to be read and coveted. The Nightingale is one of my absolute favorites. My bones ached reading that book. I wanted it to never end and end all in the same breath. All The Light We Cannot See, Sarah’s Key… so many more. I wanted to write something lighter. There’s room for stories that don’t linger on the heartache, but on the other sides of the stories. There was a whole different life happening in the states than what was seen overseas. We were able to carry on in a way other countries weren’t. We were fortunate in that way – and I felt it was okay to see a bit of that. To let these women shine a little. Because they did shine. They soared

For more Q & A with Noelle Salazar can find it here Check out the group and see who our upcoming authors.

What Noelle has to said about us

I had a lovely time doing a Q&A with Traveling Sisters & Friends. Wonderful questions that made me fall in love with my characters and books all over again. I hope I get the chance to participate with the next book!  ~NS